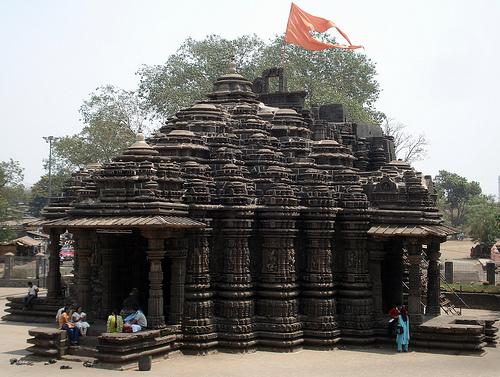 Osmanabad is an ancient city with religious shrines scattered across the district as a result of several changeover in dynasties that ruled it. Hence the city is visited by tourists and devotees for both tourism and as a pilgrimage site. Tourist spots close to Osmanabad is also popular for the ancient heritage and monuments that transports tourists to the days of Shivaji, the Mughals, Nizams who ruled Osmanabad , part of the erstwhile Marathwada.

Mankeshwar is a popular tourist spot and religious site; located in Bhoom tehsil or sub division within Osmanabad district in Maharashtra. Mankeshwar is considered a holy village for the famous Shiva Temple and Satwai Devi Temple which attracts loads of devotees all through the year. Mankeshwar’s Shiva Temple is revered and sacred as it’s constructed in Hemadpanthi architectural temple forms. Carved out of black rock, the Shiva Temple in Mankeshwar is crafted with marvellous artwork on its walls, much of which along with seven other temples encircling the main one was destroyed by Emperor Aurangzeb. Certain remains and ruins of damaged rocks and figurines around the temple suggest that the temple indeed was a huge structure once.
The temple is situated on the banks of a river which circles it and the landscape is amazing. The Shiva lingam or idol adorned with a peak is situated inside the temple embedded below ground level and pilgrims have to take a flight of steps down to worship it. The statuettes and carvings on the walls inside the temple and on its outer walls are magnificent and intricate with several poses like dancing and wrestling.

Interestingly in Mankeshwar village, the temple of Satwai Devi is located alongside the Shiva Temple. Worshipped as goddess of fortune, Satwai Devi is revered by devotees visiting the village and the temple comes alive during celebrations during the month of Chitra according to Marathi calendar. The residents of Mankeshwar village perform a ritual known as Jawal whereby babies up to 3 years of age are brought to the temple and their scalp is shaved to contribute the hair out of respect to the deity. A goat is also sacrificed on the altar of the temple by devotees. It is believed that pilgrims visit this place to seek blessings from the goddess who fulfils their heart filled wishes.
Mankeshwar is also famous for the shrine or dargah of Sayyad Hussain Qadri and scores of pilgrim visit his shrine every year.

Mankeshwar can be reached via air from Pune airport or Barshi railway station located at a distance of 16 kilometers from the village. Mankeshwar can also be visited from Osmanabad through Barshi and Bhoom districts via state transport buses run by Maharashtra government.