A fort is a classic example to tourists as to how kings and rulers in ancient period used to defend their kingdoms and fight their enemies. Marvellous architecture, superb construction and equipped with artillery, forts always are tourist hotspots scattered in parts of India. Osmanabad is a tourist destination with several religious shrines, monuments, architectural buildings and of course it is close to cities with forts. Visitors come from all over India to Osmanabad to tour these ancient historical structures which still stand tall despite being ravaged by weather and time.

Parnada Fort is indeed one such delight located close to Osmanabad at a distance of 80 kilometres. Situated within Paranda sub division, Paranda fort is a military fort constructed during the Bahamani era and the Bahamani kings also established several such forts nearby. The fort is designed as a military construction and it is encircled and made secure with a zig zag pathway and equipped with weaponry and walls to safeguard the entryway. 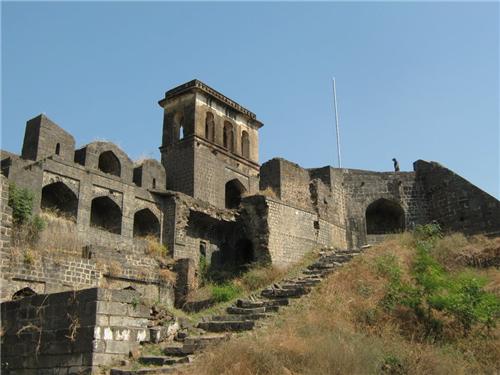 In order to keep the fort guarded from enemies; the fort is surrounded by a ditch filled with water and the fort can be accessed from a single passageway through a concrete bridge from the main gate only. Parnada Fort is guarded by 26 strongholds or ramparts among which several are fitted with cannons and the famous ones are known as Malike Maidan and Azda Paikar. Two of these strongholds guard the main gateway located to the north of the fort.

The strongholds are named Chanchal Buruj, Mahakal Buruj, Buland Buruj, Nassayeed, Shah Matkal and many more. Paranda Fort is said to be constructed by Mahmud Khvaja Gavan in late 15th Century, chancellor or royal minister of Muhammad Shah Bahamani II and exchanged rulers several times. It was part of Ahmednagar kingdom, then Shahaji of Bijapur dynasty Mughals and finally the Nizams of Hyderabad. There is a temple, a mosque, a shrine of Narsimha, a wall titled Ramtirth and several buildings inside the premises of the fort known as Zenana Makan, Taikhana, Baradari and several others. Some of the buildings lie in ruins due to damage and maintenance.

The entrance gates are beautifully decorated with shiny and polished craftwork and carvings and interestingly, stone cannonballs are still stored safely in a chamber in the fort premises.

Paranda Fort can be easily reached via railroad, road and air and via Solapur district in Maharashtra. There is good bus service and state transport buses ply on this route from nearby cities and districts.