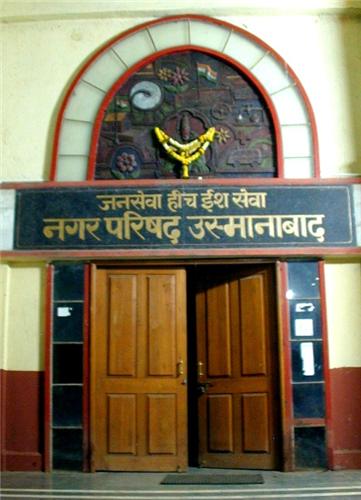 Osmanabad is part of erstwhile Marathwada region in the state of Maharashtra and popularly known as Dharashiv. The district and city shares the same name and is the administrative base of the entire district with sub divisions of Bhoom, Washi, Kalamb, Omerga, Paranda, Lohara and Tuljapur. Osmanabad is part of the Lok Sabha Constituency along with constituencies of Paranda, Omerga, Tuljapur and Maharashtra Vidhan Sabha or Legislative Assembly. Congress, NCP, Shiv Sena, BJP and BSP are some major parties who have representations in the constituencies of Osmanabad.

District Collector of Osmanabad Municipal Council also acts as the Deputy Commissioner, District Magistrate and District Registrar in charge of local administration and heading the departments of public utility, accounts, datum of land revenue collection, semi judicial tasks. He is assisted by the Special Deputy Collector in discharging his responsibilities. Under them, the Tahsildar or Revenue Inspectors is in charge of administering the villages.

More information can be found on: https://osmanabad.gov.in/